One of the most important works of Baroque architecture in Granada, along with the Cartuja Monastery, is the Basilica of San Juan de Dios, where the tomb of the saint of the sick is located.

In 1737, the Hospitaller Order of St. John of God ordered the construction of a basilica to house the remains of the saint. In the middle of the century, this large Baroque church with a Latin cross plan was erected on San Juan de Dios street.

The interior of the temple is richly decorated with polychrome wood, sculptures of saints, and a great predominance of gilding. The imposing main altarpiece behind the altar, decorated in gold and with a figure of the Virgin in the center, stands out.

During the visit to the Basilica of San Juan de Dios, you can visit the different rooms of the church, such as the offices and the sacristy.

The remains of St. John of God

The most interesting part of visiting the basilica is seeing the remains of St. John of God. In the main nave of the church lies the tomb of the saint, surrounded by candles, flowers, and allusions to the patron saint of the sick.

At the top of the basilica is the camarin, the small chapel behind the altar that houses personal objects of the saint. In a solid silver urn, you can see the wooden cross that St. John of God always carried with him, molars of the saint, and other small parts of his body recovered for his veneration.

The dome and the walls of the room are decorated with figures of angels and paintings about the life of the saint. 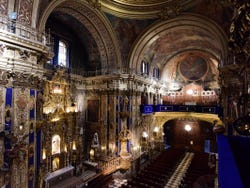 Hall of the Basilica of San Juan de Dios 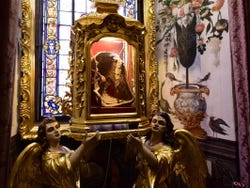 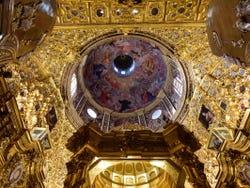 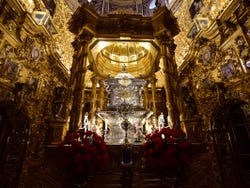 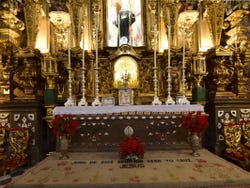 Altar of the Basilica of San Juan de Dios 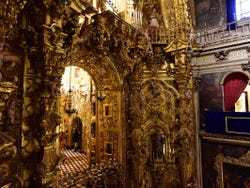 Monday to Saturday: 10 am to 7 pm
Sundays: closed