The Museum of Fine Arts of Granada opened its doors in 1839, becoming one of the first public museums in Spain. In its 6 rooms, it houses over 2,000 pieces by artists such as Alonso Cano, Pedro Machuca, Jose de Mora, and Juan Ramirez.

Located on the second floor of the Palace of Carlos V, this museum exhibits oil paintings, polychrome wood, altarpieces, triptychs, sculptures, and choir stalls made between the 16th and 18th centuries.

This variety of techniques stands out against the almost exclusively religious theme of most of the works. This is due to the fact that many of the pieces on display were recovered from the convents and monasteries that remained in the hands of the State after the disentailment of Mendizabal in 1836.

The Museum of Fine Arts was inaugurated three years later in the former convent of Santa Cruz de la Real. After passing through several venues, it was finally installed in the Palace of Charles V, where it has remained since 1958. 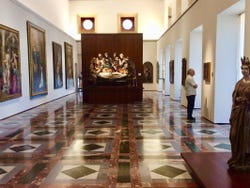 Museum of Fine Arts of Granada 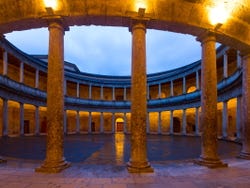 Citizens of the European Union: free admission
Citizens of other countries: 1.5EU