One of the most iconic examples of the Renaissance in Granada is the Monastery of San Jeronimo, located in the heart of Granada, just a few feet from the Basilica of San Juan de Dios. This monastic complex, which includes a large church and two cloisters, is a must-see in Granada.

The construction of the Monastery of San Jeronimo began shortly before one of the most important chapters in the history of Granada: the Catholic Conquest. However, in 1504, the Catholic Monarchs decided to move the monastery to its current location and awarded the project to Diego de Siloe.

Although the building was originally conceived as a Gothic-style building, the final result was a Renaissance monastery with a large church in a Latin cross plan inside. A large part of the construction work was financed by the widow of El Gran Capitan, who is buried in the monastery.

The order of the Hieronymites lived in the monastery until the Napoleonic invasion when French troops occupied the building and demolished the main tower. After the disentailment of Mendizabal, the monastery was used as barracks.

During the 20th and 21st centuries, the most defective parts of the Hieronymites Monastery were restored, as well as the art pieces housed within, conferring the religious complex the appearance it has today.

Visit the Monastery of San Jeronimo

The monastery consists of the Church of San Jeronimo and 2 cloisters surrounded by various outbuildings and a chapel. At present, it's only possible to visit the first floor, since the upper floor is inhabited by cloistered nuns.

During the visit, you can explore the main cloister, which is decorated with orange trees and has 7 doorways leading to the different chapels.

In one of the corners of the monastery stands the church of San Jeronimo, the highlight of this visit. It was built in the 16th century and is one of the most spectacular churches in Granada. It features an altarpiece in the main chapel where the Gran Capitan lies next to his wife. This great Andalusian sculpture represents the most heroic scenes of this noble and warrior from Cordoba. 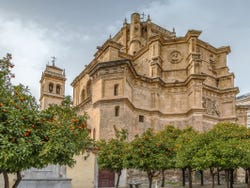 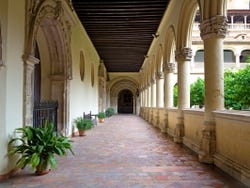 The porticoed courtyard of the monastery 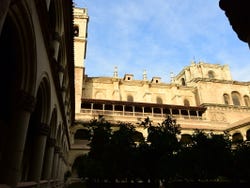 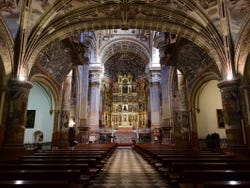 The church of San Jeronimo 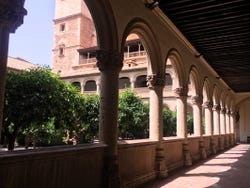