The Sierra Nevada is a mountain range belonging to the Cordilleras Beticas that extends over Granada and part of Almeria. It's the second-highest massif in Western Europe and its highest peak, the Mulhacen, is the highest in Spain at 3,482m (11,423 ft).

In 1999, Sierra Nevada was officially declared a National Park for its outstanding natural scenery. Moreover, Unesco also has made it a Biosphere Reserve.

The Sierra Nevada ski resort includes parking, restaurants on the slopes, a children's playground, lockers, and many other services. Ski lovers will be able to enjoy  68 miles (110 kilometers) of skiable slopes, 131 slopes, and 21 lifts.

You can find more information on the official website of the Sierra Nevada ski resort.

The snow season usually extends from November to April, although it may vary according to the weather conditions each year. Please note that the opening hours are reduced during the off-season.

Directions to the Sierra Nevada from Granada

The ski resort of Sierra Nevada is located 16 miles (27 kilometers) from central Granada and less than 65 miles (100 kilometers) from the coast of Motril, so you can see the beach and the snow on the same day.

The most comfortable ways to get to the Sierra Nevada from Granada are as follows: 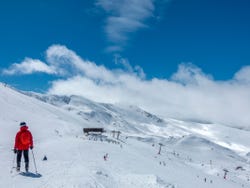 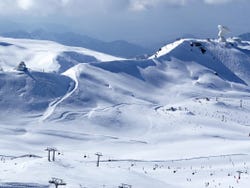 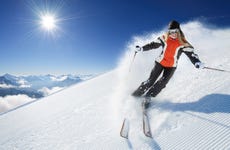 No rating yet
US$ 56.70
show all the activities