After the War of Granada, one of the bloodiest episodes in the history of the city, the population was devastated and the number of sick people grew considerably. This led the Catholic Monarchs to found a Royal Hospital in 1504, with the aim of caring for those wounded in the war and taking in all the recovering survivors.

During the following centuries, the Royal Hospital was used as a refuge and as a care center for people with mental health problems. Today, the building is the headquarters of the Rectorate of the University of Granada and houses the institution's library.

The Royal Hospital, which is located next to the Triunfo Gardens, fuses Gothic, Renaissance, and Mudejar elements. On the facade, you can see the initials of the Catholic Monarchs, the yoke and arrows, and at the main entrance, you can see the coat of arms of the monarchs carved in the traditional Granada cobblestones.

The best part: the patios

Although the interior of the Royal Hospital is not quite striking, its four interior courtyards in Mudejar style make it worth a short visit to this historic building. The most famous is the Patio de Los Marmoles, but you can also visit the patios of the Archive, of the Innocents, and of the Chapel. 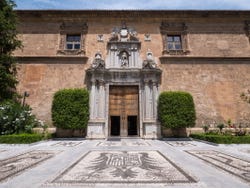 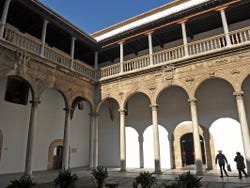 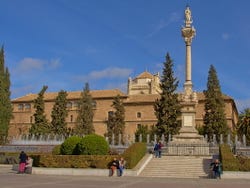