Located in the heart of the city, a few meters from the Madraza, the Cathedral of Granada is one of the most imposing monuments in the city and a masterpiece of the Spanish Renaissance.

History of the Cathedral

After the capture of Granada by the Catholic Monarchs in 1492, the city took on a more Christian appearance with large constructions designed by the monarchs. The most ambitious project was a great Gothic cathedral with a royal chapel to house the remains of Isabella and Ferdinand.

Although its construction was planned for 1506, the sudden death of Queen Isabella two years earlier led to the construction of the Royal Chapel to bury her. Therefore, work on the Cathedral of Granada did not begin until 1523.

The foundations were laid on the old main mosque of Granada. After the death of the main architect, Diego de Siloé took over and changed the entire previous design to erect a majestic Renaissance cathedral.

Siloé, who was also in charge of building the Monastery of San Jerónimo, designed a great temple with five aisles and two 80-meter towers. In the end, only one of them, measuring 50 meters, could be built.

The cathedral of Granada was completed in 1704.

One of the most impressive parts of the temple is its facade, made by Alonso Cano in the mid-17th century. It is composed of a large arch with three interior arches and reliefs of virgins and other religious figures.

It is worth mentioning that in the Cathedral of Granada lie the remains of Alonso Cano and Mariana Pineda.

One of the great attractions of the Cathedral of Granada is its fifteen chapels. Many of them house true masterpieces, such as paintings and sculptures by local artists. The Capilla Mayor stands out, which was intended to be the pantheon of the Habsburgs and was finally filled with paintings by Alonso Cano.
Must-see

The Royal Chapel is one of the monuments of Granada that you can not miss if you travel to the city of the Alhambra. Seeing the ensemble of the chapel and admiring the tombs of historical figures of the stature of the Catholic Monarchs is key to fully appreciating the city of Granada. 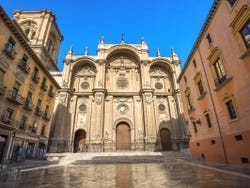 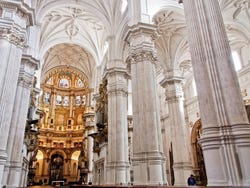 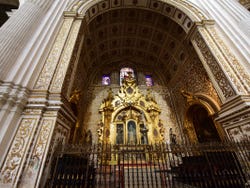 One of the chapels in the Cathedral 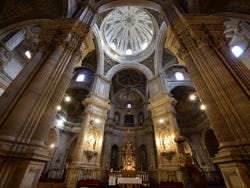 The main chapel of the Cathedral 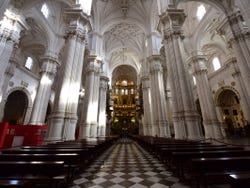 Main aisle of the Cathedral of Granada 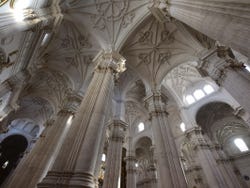 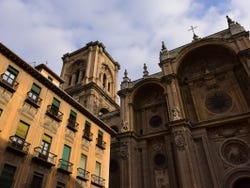 The tower of the Cathedral
7See photo gallery 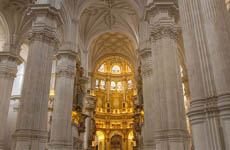