The Granada sightseeing train is specially created to easily tour all areas of Granada, including the maze-like narrow streets of the Albaicin and Sacromonte. It has a panoramic roof, free wifi, and recorded commentary in 12 languages.

The maximum speed of the Granada tourist train is 25 kilometers per hour, making it a very good alternative to see the main monuments of the city in a comfortable and relaxed way.

Also, it's a hop-on-hop-off train service that allows you to get on and off at the designated stops as many times as you want.

The Granada tourist train makes 13 stops at the main tourist attractions in the city. The major monuments included on the train route are the Alhambra of Granada, the Basilica of San Juan de Dios, the Cathedral, the viewpoint of San Nicolas, and the Carmen de Los Martires.

The duration of the complete train tour of Granada is 1 hour and 20 minutes and it has a 25-minute frequency. The night route lasts one hour. The timetable of the Granada tourist train is from 9:30 am to 7:30 pm.

You can buy the tickets directly through the web at this link: 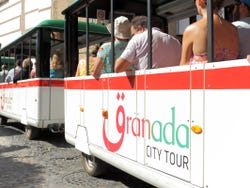