The Darro River is a tributary of the Genil that flows through Granada and crosses the center of the city between the Albaicin hill and the hill of the Alhambra. Of the thirteen bridges that used to pass through Granada, the Darro has maintained only four. Two of them are located on the famous Carrera del Darro, the Cabrera and Espinosa, and are made of brick and stonework.

A stroll along the Carrera del Darro

Both for tourists who visit Granada every year and for the locals themselves, the Carrera del Darro is one of the most beautiful areas of the city. The flow of the river is reduced in this section, which causes the growth of low bushes and shrubs.

Also, the Carrera del Darro is home to 16th-century buildings, small convents, Arab-style houses, and tourist attractions such as El Bañuelo or the Church of Santa Ana. This street is also one of the best places to buy souvenirs from Granada.

While its real name is Paseo del Padre Manjon, this avenue has been referred to as Paseo de Los Tristes ('Street of the Sad'). The reason is that the families of the dead used to pass through this street crying, carrying their loved ones to the cemetery of San Jose.

This beautiful avenue next to the Darro River is an area with a very romantic and bohemian atmosphere. In the Paseo de Los Tristes, you'll find a fountain from the 16th century, a sculpture of the dancer Mario Maya, and the Casa de Castril, which houses the Archaeological Museum of Granada. 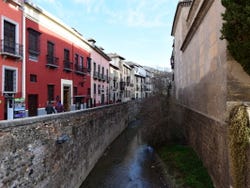 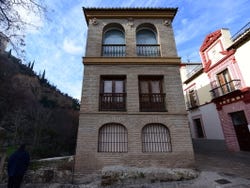 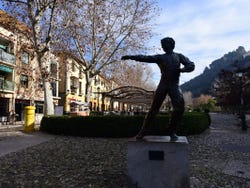 On the banks of the Darro, between Plaza Nueva and the Cuesta del Chapiz.