The term 'madrasa' means school. In 1349, the Nasrid King Yusuf I founded this university in the suburb of the Great Mosque to teach mathematics, law, theology and astrology. In the Madrasa of Granada studied characters of the stature of Ibn al-Khatib or Ibn Zamrak, two poets whose verses decorate the walls of the Alhambra.

According to historical documents, the madrasa had a large library, a permanent student residence and a laboratory.

The university was active until shortly after the conquest of Granada, when all the books in the library were burned in the street. This former madrasa took on administrative functions and housed numerous meetings of the Cabildo, the town council of the time.

Today, the Madrasa Palace is home to the Center for Contemporary Culture and the city's Academy of Fine Arts.

The best-preserved Nasrid oratory in Granada

Undoubtedly, the highlight of the madrasa is its oratory. While most of the building has completely changed its appearance due to continued renovations, the Nasrid hall still preserves its horseshoe arches, the original colors, and the latticework and plasterwork on the ceiling.

This has been possible due to the fact that this Nasrid hall was walled up during the Christian period in order to hide its Arab decoration.

Moreover, the Madrasa of Granada houses the room known as the Hall of the Twenty-four Knights, where it is possible to see one of the best-preserved Mudejar armors in Spain. 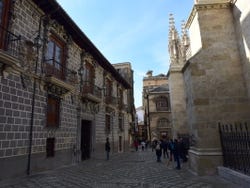 Palace of the Madrasah 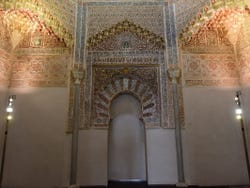 Oratory of the Madrasah 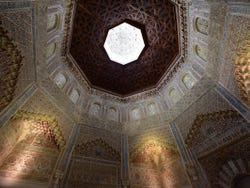 Dome of the Madrasah of Granada
3See photo gallery

Calle Oficios, 14, next to the Cathedral.