The Casa de Los Tiros is an old 16th-century fortress located in the heart of the Realejo neighborhood. It is a house that resembles a fortress and it owes its name to the shots on the battlements. Shortly after its construction, the house was acquired by the noble family Granada-Venegas.

On the façade of the Casa de Los Tiros you can see the family coat of arms, a sword piercing a heart with the inscription "el corazón manda" (the heart is in charge). Also, the absence of religious motifs on the facade is striking, in order to avoid confrontations with Christians and Muslims. On the two balconies carved on the front of the house, there are five statues representing Hercules, Theseus, Jason, Hector, and Mercury.

Since 1921, the Casa de Los Tiros became state property and became a museum dedicated to Granada. Throughout its twelve rooms are exhibited drawings, engravings, posters, newspapers, photographs, and other documents that cover the history of Granada from the 16th century to the present.

The main staircase of the museum houses a collection of royal portraits of important figures such as Isabella the Catholic, Charles V, and Philip II, among others. In one of the rooms, it's possible to see a set of 19th-century earthenware, ceramic pieces of Nasrid influence, and tapestries that belonged to important bourgeois families of Granada.

The most interesting part of the museum is the room known as the Cuadra Dorada. The wooden ceiling is decorated with figures of Spanish heroes, busts of kings, and inscriptions recounting their exploits. 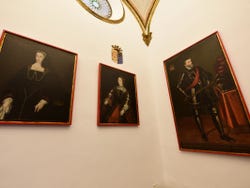 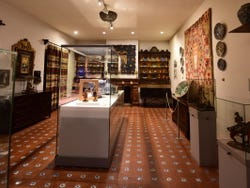 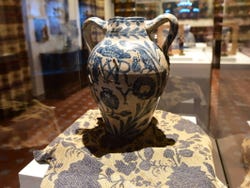 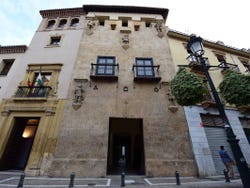