The Bib-Rambla square is the main meeting point for locals and tourists. It is one of the most historic places in Granada since its origin dates back to the Nasrid period. Its name means "River Gate" and is so-called because it was between the Darro and one of the entrance gates to the medina. Also, its proximity to strategic points such as the Great Mosque and the Alcaiceria made it one of the busiest places in Muslim Granada.

After the capture of Granada, the Christian troops transformed the square and began to celebrate public events such as bullfights, equestrian exhibitions, and even executions. Moreover, almost all the books from the library of the Madrasah were burned in the Bib-Rambla square.

Its main use in the 18th century was as a market. It housed more than fifty stalls, a hospital, and a church.

What to do in Bib-Rambla

Nowadays, Bib-Rambla is a square full of cafes and bars where you can eat or have a snack. Also, many shopping streets lead to Bib-Rambla, making it a must-visit area for shopping in Granada.

The Fountain of the Giants presides over the center of the square and is one of the main attractions of Bib Rambla. 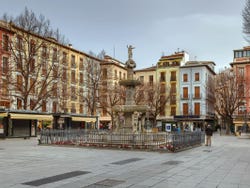 Behind the Alcaiceria and the Cathedral